“We’re probably a bit obstinate. Startups like this one are few and far between in the wood processing industry. For us, it means increased value creation from local resources.”

So says Lars Storslett, director of the newly established company Moelven Pellets AS. In 2018, Moelven decided to invest NOK 270 million in a new pellets factory and a new bioenergy plant in Sokna outside Hønefoss. The new plant will be fully-integrated with the sawmill at Moelven Sokna AS, and is the key to creating new jobs and new value from the region’s forest resources.

– “When we launched the plans, I knew this was a red-letter day, both for me personally and for Moelven as a company. The last few years have seen far more closures in the industry than major investments like this one. The last time Moelven built something completely new from the ground up was in 1978, so obviously we are proud to be writing a new industrial chapter for Moelven,” says Storslett.

The plant will be completed in 2020, and the construction work and recruitment for up to 10 new jobs started at the end of 2018.

– “The new jobs mean a lot to the local community. With the help of the pellets factory and the integrated bioenergy supply for Moelven Soknabruket, we are strengthening our presence and modernising our footprint in the region for many decades to come,” says Storslett.

By starting pellets production, Moelven is taking steps to increase the value of the residual raw materials from sawmill operations.

Moelven Soknabruket AS is one of the largest sawmills in Norway, and given that half of the logs become timber and the other half become fibre products (wood chips), we are talking about large volumes that do not become timber. Moelven needs to sell these and by starting pellet production the company is taking steps on its own behalf to increase the value of its residual raw materials from sawmill operations.
“It is important for Moelven to use the wood to its fullest. We manage a renewable natural resource and have an obligation to use it as best as possible. Therefore, the pellets and bioenergy venture in Sokna constitutes a highly sustainable and profitable way to manage our residual raw materials. Here, we are creating new value from local resources – both in the form of timber and labour,” explains Storslett.

Enova is contributing NOK 66 million to the venture in Sokna. This is due to the adoption of solutions and technology that have never been tried before in a Nordic climate. The bioenergy plant accounts for a major proportion of the overall investment and it will supply both the sawmill and the pellet factory with energy. Together with, for example, the new drying technology, this will enable the thermal optimisation of the production processes. In short, this means that energy from the sawmill that otherwise would go to waste will be used in the production of pellets. Estimates show that by doing this, one can reduce energy consumption in pellet production by up to 37 per cent.

“Developing and adopting new climate solutions is urgent. A lot of work remains to be done when it comes to replacing fossil energy with renewable energy carriers. Residual products from Norwegian forests are a part of the solution. The technology demonstrated here makes the production of white wood pellets both cheaper and more energy efficient. This is green competitiveness in practice,” said State Secretary Atle Hamar of the Ministry of Climate and Environment when the plans were launched in Sokna.

It is important for Moelven to use the wood to its fullest. We manage a renewable natural resource and have an obligation to use it as best as possible. 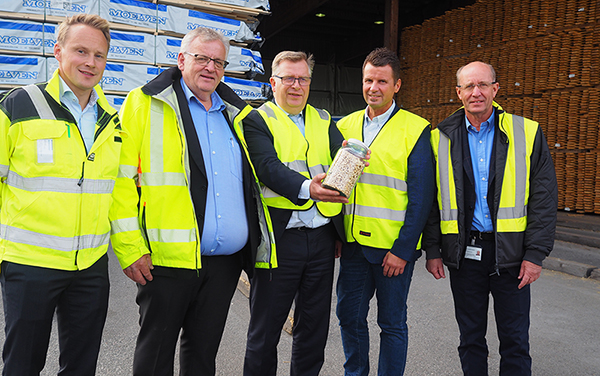