Moelven companies are often found outside the major cities and urban areas. Many of our operations are important cornerstone companies in smaller locations, both in Norway and in Sweden.

The reason for our presence in rural areas is historic. Ever since the olden days, sawmills have usually been located near large waterways and as close to the forest as possible to achieve as efficient processing of the timber as possible. This presence has major ripple effects to this day and provides a basis for vibrant local communities with public services, private commerce and volunteering.

Below you can get to know some of our companies that are creating local assets. 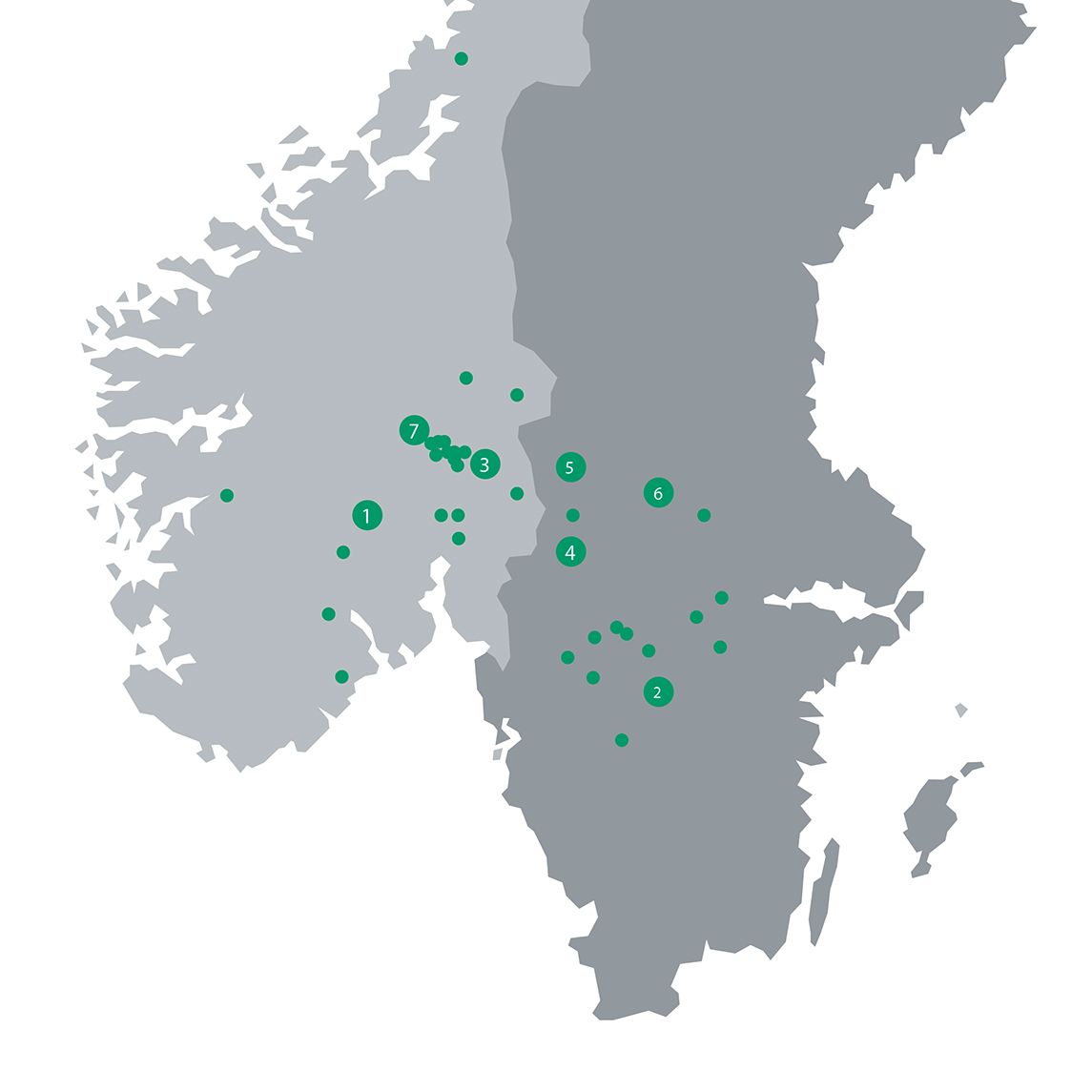 1. Moelven Soknabruket AS and Moelven Pellets AS

Norway’s largest sawmill and planing mill, in terms of turnover, is located not far from Hønefoss. At Moelven’s facility in Sokna, 107 employees turn local logs into products that become, among other things, construction timber, interior products, decking and sawn timber for export customers. Moelven Pellets AS, Moelven’s largest ever investment (NOK 270 million), is located in the same area. The residual raw materials from the sawmill are converted into pellets and a shared energy plant ensures climate-friendly production and increased value creation from the entire log.

Sweden’s oldest glulam factory is located in the village of Töreboda. The walls of the factory that celebrated its 100th anniversary in 2019 literally sit on the edge of the Göta Canal. The factory has been part of the Moelven family since 1982 and has made its mark with a number of innovation and development projects – ranging from a new wooden deck for use in tall wooden buildings (Trä8) to an ongoing pilot project building wooden wind towers.

Braskereidfoss (242 residents in 2019) is home to Moelven’s largest sawmill in terms of volume. On an average day, 50 lorries arrive at Moelven Våler AS with deliveries of logs. The sawmill, which celebrated its 100th anniversary in 2019, also has Norway’s most modern log sorting system with X-ray and 3D scanning, which in simple terms analyse what the log is best suited for.

Around every one in every eight residents of Edane works at Moelven Edanesågen. The village, which belongs to Arvika Municipality, has 800 residents. 102 people work at the Edane sawmill. This cornerstone company has been part of the Moelven family since 2004. The sawmill is located in Sweden but enjoys a unique position in Norway. The main purpose of the sawmill is to supply the Norwegian market with wood products, and those that are not shipped to Norway are often exported internationally.

The last census in 2015 counted 118 registered inhabitants in Ransby. This village in the north of Värmland and Sysselback Municipality is home to the Ransby division of the sawmill company, Moelven Notnäs Ransby AB. Around 40 people work here, which is not by chance. The sawmill was struck by fire in November 2018 and faced an uncertain future. However, Moelven decided to continue the mill and a significantly updated and more modern dry sorting line with camera sorting arose from the ashes. The more modern sawmill and more efficient operations meant that one shift had to be shut down, but the investments made after the fire have nevertheless improved the future outlook of the operation in this small village.

The village of Hulån in Vansbro Municipality is home to one of Moelven Modus’s three factories. Here, approximately 40 people work on producing flexible room solutions for commercial buildings. The factory has been part of the Moelven family since 2000 and mainly supplies the Swedish market, although it also supplies Norway with some products. In recent years, considerable investments have been made in the factory, and a new production hall and a new modern paint plant were completed in 2019.

Moelven Treinteriør is located right on the banks of the Mjøsa lake and celebrated its first 100 years in 2019 with record results. The planing mill in the small village of Brøttum, with its around 1,500 residents in Ringsaker Municipality, is a leader in Scandinavia when it comes to solid wood floors, such as oak or pine. If you are visiting a luxury restaurant in Tokyo or have laid a new solid wood floor in your home or cabin, the chances are that it was made by the quality conscious team in Brøttum.